*Written for The Daily Record: https://www.omahadailyrecord.com/content/creighton-forum-highlights-immigrants’-struggles 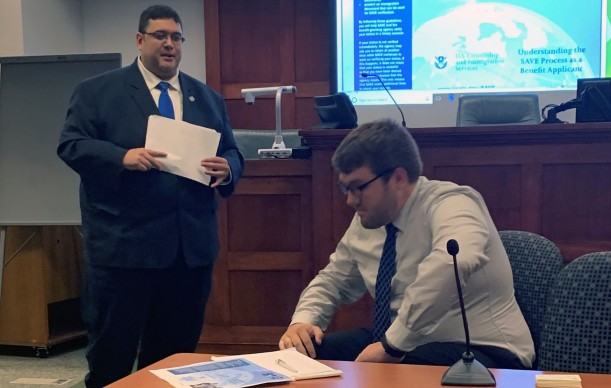 The uncertainty regarding the status of immigrants and asylum seekers at the federal level has resulted in accusations of confusion and indecision by state officials charged with renewing driver’s licenses.

A recent conversation hosted by the Creighton University School of Law sought to explore the impact of shifting federal policy for persons with Temporary Protected Status, a federal program that grants temporary legal status to certain foreign nationals from countries where it would be unsafe to return.

The office of U.S. Rep. Don Bacon hosted a conversation on driver’s license and identification renewals for individuals with TPS with several Nebraska Department of Motor Vehicles employees on Sept. 20 at the law school. The forum sought to answer questions about the federal Systematic Alien Verification for Entitlements Program, or SAVE, which seeks to prevent people from losing their identification.

Rick McFayden, associate dean for student affairs and administration at Creighton Law, introduced the discussion along with first-year law student César Magaña Linares, who served as an interpreter.

“We appreciate being able to be of assistance and be a platform for this conversation,” McFadden said.

Luis Guzman, a constituent liaison from Bacon’s office, gave an overview of SAVE, which uses a three-step verification process to determine a person’s immigration status, including their eligibility for TPS benefits.

SAVE is administered by the U.S. Citizenship and Immigration Service, part of the federal Department of Homeland Security. USCIS handles the administration of immigration and naturalization for DHS, while Immigrations and Customs Enforcement (ICE) handles investigations and deportations and U.S. Customs and Border Protection (CBP) protects the nation’s borders and oversees ports of entry.

At the forum, DMV employees and community members with TPS discussed how the multiple steps of the verification process at a federal level that can result in months of waiting – often up to a year.

The system also has resulted in some people with TPS saying they can’t access their benefits.

Several attendees of the forum, for example, said they brought all their required documents to renew, but they were not granted their licenses. One person said they were denied a license despite documentation from her attorney showing it should have been approved.

Another person with TPS said that a police officer won’t care if they have sought a driver’s license and have a right to obtain a driver’s license. If they’re found without one while operating a motor vehicle, even if it’s to work or school, they will face a citation.

“The person that’s affected by that ticket – that impacts their ability to seek other immigration benefits in the future,” the attendee said.

Matt Giesler, a DMV examiner who handles TPS cases, apologized to the immigrant for his negative experience. “We are training our examiners as quickly as possible,” Giesler said.

Giesler said the SAVE program is relatively simple, despite the problems some have encountered. The noncitizen has to present an employment authorization document, valid foreign passport or other immigration document. However, Giesler said he would pass on the concerns brought up during the Creighton forum to appropriate supervisors at the state agency.

Adam Eakin, a project and information manager at the DMV, encouraged applicants who do encounter a problem to ask for a supervisor to review such cases so that all TPS recipients and other protected groups receive their documents in a timely manner.

“Please do not hesitate to bring this to our attention,” Eakin said.

Eakin said the DMV will continue to follow current federal regulations while legislation is crafted at the federal level regarding which countries continue to qualify for TPS.

From El Salvador alone, 3,000 TPS recipients in Nebraska are currently in jeopardy of losing their benefits. Other countries currently qualifying for TPS include Haiti, Honduras, Nepal, Nicaragua, Somalia, Sudan, South Sudan, Syria and Yemen, according to USCIS.

McFayden said he hopes the strong turnout and enthusiasm at the forum indicates that the discussion will make a difference.

“Creighton looks forward to being a conduit for information from state organizations to the constituents that they are serving,” McFayden said.